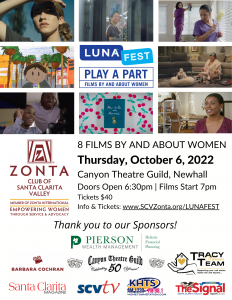 Zonta Club of Santa Clarita Valley celebrates Women in Film with LUNAFEST® 2022 screening on October 6,  2022 at Canyon Theatre Guild in Newhall.  Eight ingenious films will  present themes of race, identity, loneliness, artistic bravery, an immigrant’s journey, entrepreneurial innovation, family ties and the kindness of strangers.  These films are created by women and are about women.

Tickets are $40 each at www.scvzonta.org/Lunafest 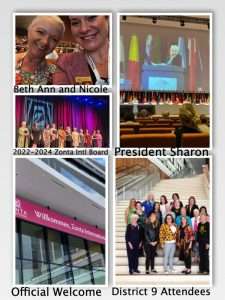 In June 2022, Club President Nicole Miller and Club Vice President Beth Ann Ryan attended the Zonta International 65thConvention in Hamburg, Germany. They were honored to represent the Zonta Club of Santa Clarita Valley as delegates and served as proxies for two other clubs in all matters such as: voting on bylaws, resolutions, elections, international service projects, fundraising goals, and more!  Club involvement in Zonta International by participating in our biennial convention is critical to ensuring that all voices from around the world are heard through involvement in this process.  Attending convention is also a fantastic way to be immersed in the fellowship of Zonta and to make connections for collaborating when you return home!

Nicole and Beth Ann share, Hamburg welcomed us with open arms by hosting us for a private Senate reception where we were welcomed by the President of the Senate.  Zonta International President Dr. Sharon Langenbeck (from the SCV) also welcomed all Zontians and presided over our multiple days of convention business.  We participated in workshops covering a variety of topics such as: mentoring, the impact of climate change, child and forced marriage, gender equality, fundraising, women’s health issues, and more.  A highlight in the memory of each previous attendee is the Parade of Flags as convention is officially opened.  The parade showcased and honored the flag of each country and region in which there is a Zonta club.  It was impressive to see the diversity in Zontians all coming together for one mission.  We can’t forget the multiple business sessions of voting and elections, which prepares Zonta International for the upcoming biennium.  The Business Sessions were followed by Keynote Speakers on relevant topics for women, a reveal of the new Zonta motto “Build a Better World for Women and Girls,” fundraising goals, and an in-depth report on the international service projects.  While doing all this important work and gathering knowledge, we meet with our new Zontian friends in fellowship and to celebrate our successes and the impact made in our communities.  One of Nicole’s favorite events at convention was the “dine around” where members of local Hamburg clubs hosted groups in their homes and served a traditional German meal.  “I am grateful to have participated in this wonderful night celebrating friendship with the local Zontians,” she says.  On the last night of convention, the newly elected board was installed at the closing banquet, where attendees celebrated all that was accomplished and said their goodbyes (until next time!) to new friends.

As Zontians, we all want to build a better world for women and girls.  Convention allows us to come together to share ideas, participate in discussions, and learn more about the issues facing women around the world.  Returning to the SCV, we are invigorated and excited to use our Zonta spirit to make a difference for women here in our community.

Zonta Club of Santa Clarita Valley improves the lives of women and girls in our community and worldwide through our service projects, advocacy, education and awareness campaigns.  We empower women of all ages to believe in themselves, build a hopeful future, and be the most authentic and powerful version of themselves they can be. 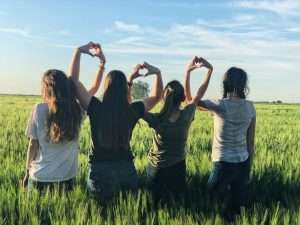 If you would like to learn more about how you can be a part of improving the lives of women and girls, contact us today!

Make a donation today that will impact the lives of women and girls in our community and around the world!

The Zonta Club of Santa Clarita Valley welcomes people that are interested in furthering our mission of empowering women through service and advocacy. We meet on the 2nd Wednesday of each month at 6:30 p.m. We are currently holding our meetings via Zoom. If you are interested in joining us, please use the link below. 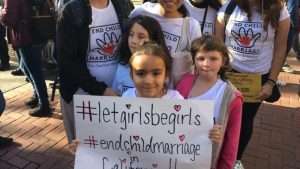 Current marriage age exception laws in CA offer dangerous loopholes to predators who can and do use them to exploit children.

You can make a difference - get involved to end child marriage in California!

Have you missed one of our LifeForward Workshops?  Do you want to watch a presentation again?  Want more inspiration?

Check out our LifeFoward videos!

Zonta in the News

Thank you to our generous sponsors!

Honor a Woman In Your Life Today!

Thank you to our media sponsors!

Zonta International envisions a world in which women's rights are recognized as human rights
and every woman is able to achieve her full potential.

In such a world, women have access to all resources and are represented in decision making positions on an equal basis with men.

In such a world, no woman lives in fear of violence.