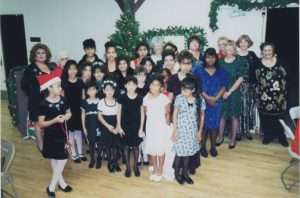 In the early 1990's, Zonta Club of Santa Clarita Valley decided to create a new service project. Led by the late Mary Spring and Lois Bauccio, the community nonprofit organizations were interviewed to determine the most pressing need for women and (or) girls in the community. A number of the organizations as well as the Sheriff’s Department and the local media were concerned about the proliferation of girls “jumping in” to gangs in Newhall and Val Verde. A club member at the time was Peggy Freeman who was the Executive Director of the Samuel Dixon Family Health Center located in Val Verde. She had formed a children’s group as part of a city-wide effort to promote the SCV by the City of Santa Clarita called Healthy Cities 2000. She agreed to have Zonta take her little public relations effort and turn it into a structured “club” for the at-risk girls in the Val Verde area.

We started with a group of about 10 girls (plus the younger siblings they brought along because they were often the care givers). In the beginning we met in the tiny Sam Dixon office, but we quickly outgrew it and moved into the large club house located across the street from the clinic in Val Verde Park. The girls selected club colors (purple, green and gold). They were given purple tee shirts with a logo designed by the late Randy Wicks, and purple baseball hats decorated with their names and “HKC” on the front. They met on Saturdays. We served refreshments and offered fun activities (cooking, crochet, sewing, etc.) as well as instructive life lessons (manners, positive self-image, etc.). We had parties, Father/Daughter Dances, fashion shows (featuring dresses provided by JCPenney), Mother/Daughter Luncheons, potlucks, field trips, and much more over the years.

Lois wrote a proposal and HKC was awarded a $5,000 grant to operate by the Los Angeles Times, whose staff came to visit the club and were deeply impressed with our progress with the girls. Lois, Mary and Darleen Lyons were invited to a special luncheon at a San Fernando Valley hotel to be presented with the donation. Key leadership volunteers of the group in addition to Lois, Mary and Darleen, were the late JoAnn Rodriguez, the late Lydia Coffman, as well as the numerous club members who participated regularly including Pat Allen, Pat Warford, Mary Caravalho, the late JoAnne Darcy, and more. A scholarship was created for girls from the HKC who registered for college or went into the military. We were supported in our efforts by Arlene, the clinic office manager, who ensured the girls’ attendance, and our “Senior Girl”, Carolina Orozco, who took care of many assigned tasks and communicated during the week with the girls. When the club was started, there were no other activities for girls in Val Verde. We operated for about ten years, and when the Boys & Girls Club set up a satellite office in the park club house and the PAL also set up activities for the girls, the need for Zonta declined. When HKC was concluded, we were proud of our accomplishments, and the need to intervene with potential gang affiliation for girls in Val Verde had also declined.

It was a great experience.