Warning: count(): Parameter must be an array or an object that implements Countable in /home/rocketht/public_html/scvzonta/wp-content/themes/virtue_premium/lib/cmb/init.php on line 746
 Women in Service – Zonta Club of Santa Clarita Valley

"for Improving the Status of Women through Community Service"

Carmen Sarro is the epitome of the spirit of volunteerism among Zonta members of the Santa Clarita Valley.

The award recognizes and celebrates the life of our dear member, Carmen Sarro, who had such a positive impact on the people and organizations in the Santa Clarita Valley.

Make your reservation for the 2020 Women in Service Luncheon.  Seating is limited, so make yours early.  Reservations are $75 per person until April 13, 2020.  After that $90.  Use button below to print the reservation form or pay online using PayPal.

Women in Service Reservation mail in form
Pay online using PayPal. Be use to enter all attendees names and the organization you would like to sit with. We will do our best to accomodate all requests. Please indicate how many reservations you are making on the next screen.

Photos from 2019 Women in Service Event

Mark your calendars May 2, 2020 Sand Canyon Country Club 10am

Nomination forms have been mailed to non-profit organizations within Santa Clarita Valley.

Use the button below to download a copy of the application form.

The 2019 Women In Service Celebration 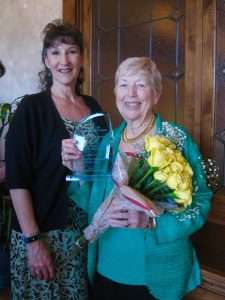 Mary Jane Hartman, who has been volunteering with the SCV Senior Center since 1994, has received the Carmen Sarro Community Service Award from Zonta Club of the Santa Clarita Valley. Hartman was selected from a slate of 21 local women nominated by Santa Clarita Valley non-profit organizations for the honor at Zonta's annual Women in Service brunch recently at the Oaks Grill in Valencia.

All 21 nominees were honored during the program before Sarro's daughter, second generation Zontian Christine Sexton, announced the final winner. A Zonta committee selects the Carmen Sarro winner each year as the nominee who best epitomizes the commitment to volunteer service that Sarro maintained throughout her lifetime.

A former nurse, Hartman began volunteering with the Senior Center as a member of the Annual Health Fair Committee. She assisted with training numerous student nurses who came to the Senior Center for their service hours, guiding them through the program and assisting them with their assignments. Her compassion for helping others led her to the Senior Advisory Council, where she has served as the chairperson off and on throughout the last 30 years.

Her skills were also used throughout the years by the Support Services Department to assist with case management, regarding medication and disease education. Today, she continues to serve on the Senior Advisory Council, assists with blood pressure checks and continues to advocate for quality of life for local seniors.

In 1997, Hartman became a driving force on the SCV Committee on Aging's Board of Directors. She has supported the center's fund development through the Celebrity Waiter Dinner event, which she helped to bring to the senior center, and the Wine Auction, which successfully contributed to the ongoing programs and service of the senior center for many years.

With focused professionalism and compassion, Hartman has been instrumental in the ongoing operations of the SCV Senior Center Adult Day Care Program, the Annual Health Fair, the Senior Advisory Council, and SCV Committee on Aging. She has been influential in fundraising for the economically disadvantaged elderly women and girls of the Santa Clarita Valley.

"Mary Jane is an altruistic volunteer to the community that makes the Santa Clarita Valley a special place to live," her nomination concludes.

Before Hartman was announced as the Carmen Sarro Award winner, Mistress of Ceremonies Marlee Lauffer introduced each of the 21 honorees, saluted the organizations which 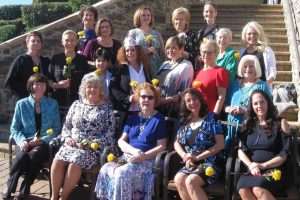 nominated them and presented each with a nominee’s award. Each honoree received a long-stem yellow rose, the symbol of friendship for Zonta International, and certificates of award from local elected officials. The program opened with Elisha Soronio, a Canyon High School graduate, singing the National Anthem. She was then joined onstage by her brother Marco, on guitar, for an inspiring musical piece.

"We are pleased that 21 diverse organizations submitted nominees this year, representing thousands of hours of community service,” said Mary Ree, event co-chair with Zonta Past President Judy Penman. “It was evident when going through the applications that the Santa Clarita Valley is blessed with many giving women.”

Penman noted that Zonta Club of SCV has been honoring service to the community for 35 years with this year’s brunch and found it appropriate that the top award honors Carmen Sarro, who shared her time and talents with many community organizations in addition to Zonta. More than 200 honorees and guests attended the Saturday program.

The March 16 event included a buffet brunch, prize drawings, a marketplace featuring vendors whose merchandise supports women's causes, and presentation of all 21 nominees and their nominating organizations. At the end of the program, a stunned Mary Jane Hartman accepted the 2019 Carmen Sarro Community Service Award, representing outstanding service to her organization, to the community as a whole, and to Zonta's goal of improving the lives of women and girls.