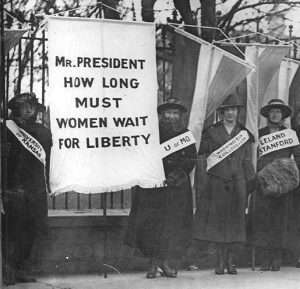 The 19th Amendment guaranteed all American women the right to vote.

August 26, 1920 is a day in women’s history that we need to acknowledge and remember. The U.S. Secretary of State, Bainbridge Colby, certified the 19th amendment on that day. It was 72 years after women’s suffrage started.

The right to vote wasn’t given to us; it was a fight that we won. In February 1913, a group of women including Rosalie Gardiner Jones and Ida Craft walked from Hudson Terminal in New York City to Washington DC. On the first day, they had over 200 women that followed them, and by the second day, there were 16. Those 16 women continued to fight for the right to have women vote in our country and be equal to men.

Alice Paul, a key figure that led to the passage of the 19th Amendment, said: “It is incredible to me that any woman should consider the fight for full equality won. It has just begun."

Did you know that Yellow roses were a symbol of the suffragette movement in the 1920s?

There was a 24-year-old politician by the name of Harry T. Burn whose unexpected vote allowed the 19th amendment to pass. In 1919, when the state legislators were to vote, the men wore red roses to signify they were against the amendment. The yellow rose meant you were for it. Harry T. Burn of the Tennessee General Assembly switched his red rose to yellow because his mother asked him to. This gave women the right to vote.

On May 21, 2019, some members of the U.S. Congress wore yellow roses to mark 100 years since the House of Representatives voted to pass women's suffrage.

The Equal Rights Amendment (ERA) was passed by Congress on March 22, 1972 and sent to the states for ratification. In order to be added to the Constitution, it needed approval by legislatures in three-fourths (38) of the 50 states.

By 1977, the legislatures of 35 states had approved the amendment. In 1978, Congress voted to extend the original March 1979 deadline to June 30, 1982. However, no additional states voted “yes” before that date, and the ERA fell 3 states short of ratification.

And the fight is still going 100 years later.