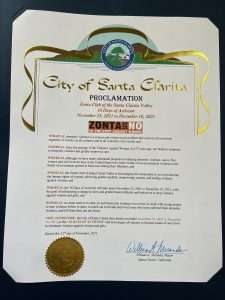 Thirty-five percent of women worldwide have experienced either physical and/or sexual intimate partner violence or non-partner sexual violence. As part of the 16 Days of Activism against Gender-Based Violence—an international campaign that aims to inspire action and end violence against women and girls around the world—the Zonta Club of Santa Clarita Valley along with members of the local community, displayed the SCV Red Dress Project last month on Saturday October 16th during Child & Family Center’s Purple Palooza Walk.

We have several dates for the SCV Red Dress Project this fall at the Saugus Swap Meet. We will continue to display them next spring throughout the Santa Clarita Valley. Check our website for the full schedule. Please visit www.SCVZonta.org/advocacy.

In December of 2018, Bill Miranda graciously spoke at our monthly business meeting about gender equality and what it meant to him. He has been a longtime supporter of our club. We would like to thank him and everyone from the City of Santa Clarita for supporting the Zonta Club of Santa Clarita Valley.

Zonta Says NO to violence against women.

At the local level, Zonta clubs across the world have organized activities and events as part of the 2021 Zonta Says NO to Violence Against Women campaign, which focuses on the service and advocacy actions of Zonta clubs and districts to prevent and end violence against women and girls in their local communities.

“As the world faces the COVID-19 pandemic, instances of gender-based violence are on the rise. Now, more than ever, it is essential that we work together to end violence against women and girls,” said Zonta International President Sharon Langenbeck and a member of the Zonta Club of Santa Clarita Valley. “Through the Zonta Says NO to Violence Against Women campaign, Zonta clubs around the world are uniting to raise their voices to bring awareness to this issue and advocate on behalf of gender-based violence survivors.”

Each year during the 16 Days of Activism campaign, which runs from 25 November – 10 December, Zonta International encourages its clubs to participate in advocacy efforts that focus on prevention, protection and prosecution.

Founded in 1974, Zonta Club of Santa Clarita Valley is a dynamic organization of professional women working together to advance the status of women and girls in the Santa Clarita Valley and around the world. Zonta Says NO to Violence Against Women began in November 2012. To learn more and join the campaign, please visit www.zontasaysno.com. Zonta International’s ongoing efforts to end violence against women and girls at the international level are carried out through the Zonta International Strategies to end Violence Against Women (ZISVAW) program and through Zonta’s partnerships with the United Nations and its agencies. Since the program’s inception in 1999, more than US$9.5 million has been provided to support projects to prevent and end violence against women and girls in 46 countries.