Zontian of the Year in our club's highest award given to one of our members. This award is for outstanding service, committment and dedication to Zonta. It looks at all years, not just the prior year, and a persons level of giving to our club and community. 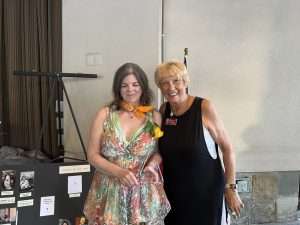 Cindy Kittle was selected as Zontian of the Year for 2021-2022.  Cindy’s involvement in our Zonta club is long. She has been an active member many years and served as President 2009-2010. She has served as chair of numerous committees, but the highlight for our club, she brought Lunafest to the SCV. Cindy was responsible for contacting LUNAFEST in 2011 to get permission for Zonta to be the only nonprofit to show the films in Santa Clarita.

True to the title, “Zontian of the Year”, Cindy created a new event for our club in 2021 to celebrate our 10th anniversary of Lunafest. Literally from the ground up she developed and pulled off an outstanding fundraising event, Zonta Celebrates Women in Film, which included developing a new relationship with local women in our film industry and honored them in a glittering awards event, produced the screening of the 2021 Lunafest films at our local Laemmle Theater, and followed up the evening with a Saturday conference for local young women who want to get into the film industry which received unparalleled publicity for the club. All during the midst of a pandemic when most members of the club had not seen each other in person for nearly 2 years!

To pull off the event, Cindy worked with her dedicated co-chair, Fran Fiel, who did the complicated logistics for the event, and several club members who supported the event in various ways. She demonstrated extreme leadership and dedication, driving back and forth from Texas and wearing out the welcome mats of friends who let her stay with them for extended over-nights. She met with the City of Santa Clarita and the County of Los Angeles who gave the club financial sponsorship for the club’s first time. She met with filmmakers and studio executives and secured support and sponsorships. The workshop she created has been selected by ZI as a service project to be highlighted at the 2022 Zonta International Convention in Hamburg, Germany, selection which signals the event as a candidate for a special award at the convention, a first for our club.

The work Cindy did for WIF is truly unparalleled. Sponsorships, ticket sales, marketing, a fun and innovative event that helped Zonta shine and gain respect in the community, and much much more were accomplished by her efforts.

Cindy has also served on the Zonta Club of SCV Foundation, District 9 Finance Committee as well as a member of Zonta International Investment team. She has remained active in our club despite her move to Texas a few years ago. She has designed several Zonta Installations (notable: Snap, Crackle, Pop for Nicole Miller and Woodstock for Chris Miller). She is a major donor to ZI, and she keeps an active relationship with numerous club members in clubs throughout the district, as well as globally.

Cindy has been a dedicated volunteer and donor to The Domestic Violence Center and Single Mothers’ Outreach. She supports the Boys & Girls Club of SCV and other charities. She is a longtime member of Rotary 5 of Los Angeles.

Congratulations Cindy, you are a shining star to us! 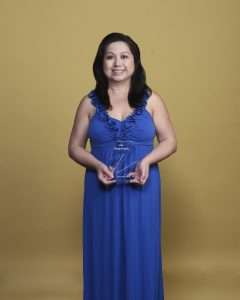 Edna was a very active member 10 years ago as a young mom of a son. She joined and became involved in almost every committee and helped on all of them. Edna's professional life took hold and she had to back away from non-profits until her business was more established. Edna was very involved in the State Women's Insurance organization and became a leader for many years.

After her daughter was born and growing up, she wanted to give back and joined Zonta again and with a gung-ho attitude. She has been very involved in PR for the club this year, taking it to a new level. She put Zonta on the map, so now you can find us in places like LinkedIn, Facebook and Instagram.  Also on the map are new ideas, Membership Monday, Women Wednesday, Throwback Thursday and Flashback Friday all located on social media. And locally, she has put us on all the community calendars in town: City of Santa Clarita, KHTS, Inside SCV Magazine, Santa Clarita Magazine, the Signal, and SCV Non-Profits event calendar.  We have press releases monthly if not more often in all the local media. If that is not enough, Edna has written most of the blogs that are posted on our website and on social media.  Thanks to Edna and her PR committee, the whole of Santa Clarita knows who and what Zonta is.

Edna runs a very professional PR committee meeting, featuring a detailed agenda and limited to one hour. If we finish early, then we have social time, but that’s it - one hour.

After losing her father at a very young age from a heart attack, her mother’s struggle with breast cancer, and Edna’s own inability to conceive, she began her own company, The Wellness Institute, which focuses on holistic health & wellness.  Prior to that she worked in the insurance business becoming President of the LA Chapter of the National Association of Insurance and Financial Advisors, founding President of the LA Chapter of Women in Insurance and Financial Services. She was a busy young lady!

She has served as a director on the club board 2010-2011. Upon returning to Zonta in 2019, she asked what she could do and it was suggested she run for the club secretary position, which she did. Like everything Edna does, she took the secretary very seriously and detailed all of the club board and business meetings thoroughly.  She did not miss anything. Committees she has served on include Women in Service, JMK, YWPA, Virginia Wrage and Healthy Women’s Day. 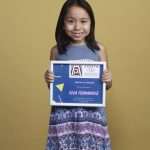 Now another surprise.  We are pleased to present this certificate to Ella Fernandez as our Zontian In Training.  Ella has accompanied Edna everywhere, proudly wearing her Zonta shirt.  Some day she will make a great Zontian and hopefully as a member of our club.

Edna is very quiet and private, but has a heart of gold and loves helping others in any way she can. Our club is very fortunate to have Edna as a member, along with her beautiful daughter, Ella, our Zontian in Training. 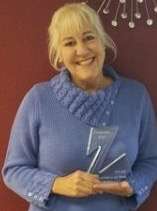 Our Zonta club held their annual installation via ZOOM as a result of Covid-19.  It was a lot of fun and one of the highlights is Zontian of the Year.

She has been on the several committees such as Advocacy, Lunafest, Membership, Women in service, Sierra Pelona, and Yellow Rose.  She was also the 2018-2020 Annual Awards chair.  She has been on the Club board 2019-2020 and is on the 2020-2021 club board.  Fran is also active with the SCV Child & Family Auxiliary and Buhai Center for Family Law.  In addition she is an attorney. 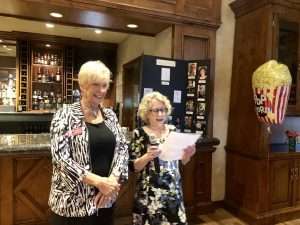 Super-active club member and three-time club past president Judy Penman as Zontian of the Year at the annual installation dinner recently at the Oaks Club in Valencia.

Judy as been a member of our Zonta club for 27 years  and has held every position except treasurer. She chaired the 2018 & 2019 Women in Service Celebration brunch and was honored for her consistent support of Zonta's mission of helping all women and children locally and internationally.

In the community, she has been involved with most non-profits in the SCV, starting with Zonta and then Domestic Violence Center, where she is the longest living member of the board for 13 years and president for three years.  She then joined the board of Circle of Hope and served three years as president, continuing with that non-profit as secretary and fundraiser. Judy also joined the WISH Foundation board, serving the Wm. S. Hart Union High School District. She then joined the Assistance League, where she served on the board for four years, two years as philanthropic vice president, and two years as first vice president of resource development.

And if that is not enough, she also ushers at the local Performing Arts Center and is on the board of the Senior Center Advisory Committee, where she is fundraising chair. An active supporter of the Boys and Girls Club, she chaired that organization's annual auction for several years.

One of her nomination forms said, "Judy volunteers because she believes in helping others, however she can. She has been volunteering since she arrived in Santa Clarita, after meeting the dynamic women in Zonta who got her involved in all other events in the community. Judy believes that receiving this award from her peers is one of the best awards she would ever get, as she goes into a new chapter of her life."

Zontian of the Year is selected from member nominations. The final winner is selected not only for her leadership in Zonta, but also in the way she represents the club in the local community. The final selection committee is composed of former honorees. In making the presentation, committee chair Sue Hayward also announced two honorable mention recipients—Beth Heiserman and Francine Fiel. 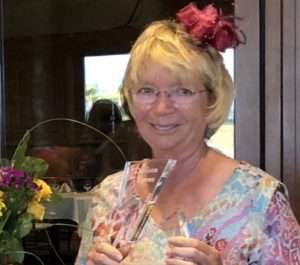 Super-active club member Darleen Lyons was named as Zontian of the Year at the group’s annual installation dinner recently at the Oaks Club (formerly the Tournament Players' Club) in Valencia.

Darleen has served the club as club treasurer for eight years, has been club president in 1993 and 2006, and has served as both first and second vice presidents of the club. She also has been an active member of the club's Tribute, Lunafest and Golf Tournament committees, and was active in former club activities such as Rent-A-Santa, Healthy Woman's Day and Healthy Kids Club.

On the Zonta International level, Darleen served as District 9 treasurer for four years and was a member of Zonta International's Service Committee. She and her husband, Bill, have revitalized the Girls Robotics program that Zonta sponsors at the local Boys & Girls Club.

In the community, she has been an active supporter of the SCV Boys & Girls Club auction and science hours, AT&T Golf Tournament, host family for international students, SCV Senior Center's Celebrity Waiter dinner, Wine Auction and Home Delivered Meals kitchen volunteer, American Red Cross, American Heart Association, and Downtown Newhall's Western Walk of Fame. She has been named volunteer of the month for the Senior Center in 2016 and Volunteer of the Year for the Boys and Girls Club twice, in 1986 and 2015.

"A member since 1988, Darleen has been a committed Zontian—always at major fundraising events doing check-in for Zonta and (community) fundraising events," says her formal nomination. "She is a member that gets things done. She does not complain and works efficiently behind the scenes. She truly loves Zonta and the community."

Zontian of the Year is selected from member nominations. The final winner is selected not only for her leadership in Zonta, but also in the way she represents the club in the local community. The final selection committee is composed of former honorees.

Congratulations to past Zontians of the Year.  We are sorry we do have detailed information on their contributions, but to us they are VERY important members.